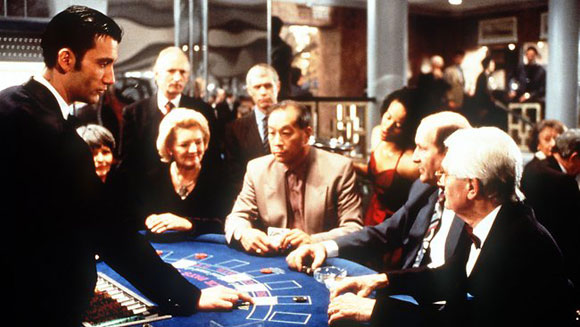 Vegas Vacation (1997) is the fourth film in the Vacation franchise and this time the Griswolds are heading to Las Vegas. Chevy Chase plays Clark, Beverly D’Angelo is back as wife Ellen and Randy Quaid is delightful as Cousin Eddie. Clark decides to surprise his family with a dream trip but instead of bringing the family together, things keep getting in the way of quality family time and Cousin Eddie just makes things more complicated. When the Griswold family hit the road you just know there is going to be trouble in paradise.

The Adaptation from a Popular Novel

Indecent Proposal (1993) stars Demi Moore, Woody Harrelson, and Robert Redford. A newlywed couple finds the perfect spot to build their dream house and take out a loan. The recession hits and they decide to spend the last of their money on a game of Roulette, hoping to win the money they need. Instead they lose their entire life savings. A billionaire proposes that Moore spend the night with him and he will give them money. The couple agree and a whole host of problems ensue. The film is based on the novel by the same name.

Diamonds Are Forever (1971) has Roulette as the star of the show. At the Whyte House Mansion Casino, James Bond plays some nail biting rounds of Roulette using his unique strategy. Bond pretends to be a diamond smuggler to investigate a smuggling ring that plans to use diamonds for a space-based laser weapon. He is lead from Amsterdam to Las Vegas and then into the desert on another action packed Bond adventure. It is the last of the Bond films to star Sean Connery and was directed by Guy Hamilton.

Casablanca (1942) tells the story of casino owner Rick (played by Humphrey Bogart) and his plan to help people escape German-occupied Casablanca during World War Two. One of the most famous scenes is Rick rigging the Roulette table so that two newlyweds can win big money which allows them to buy travel visas and escape the Nazis. Bogart’s love interest is played by Ingrid Bergman and he is torn between his feelings for her and helping her and her husband to escape in order to continue the fight against the Germans. This old Hollywood classic is film noir at its best.

Dirty Rotten Scoundrels (1988) is set in the French Rivera and follows two con men, played by Michael Caine and Steve Martin. These two win thousands of dollars playing at casinos in France and one of the best scenes is the men competing against each other at Roulette and trying to impress the ladies. The story was so successful that it later became a musical. The Michael Caine and Steve Martin duo make for magnificent comedy. It’s believed that Roulette was invented in France in the 17th century and the word means “small wheel” in French.