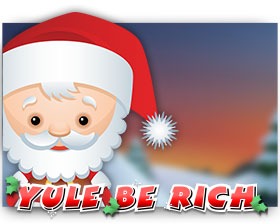 Whether as a result of a religious inclination, or the mere festive feel of it all, Christmas is a holiday thoroughly enjoyed the world over.  Christians celebrate the birth of Jesus Christ, but many variations exist on the traditional Christmas story.  In Russia and the Ukraine for instance, Christmas is celebrated on the 7th day of January, and not on the 25th day of December, as is traditionally done.

In Ireland, tradition dictates that a bottle of Guinness be left out as a snack for Santa Clause.  Paired with a couple of mince pies, of course.  The Norwegians believe that witches and evil spirits emerge on Christmas Eve, and steal brooms and take to the skies.  Brooms are hidden away in homes, and shots are fired into the sky to ward off the evil spirits.

Whatever the tradition or inclination, Christmas is a much anticipated and widely celebrated holiday.  It stands to reason then that an online slot game would be developed in its honour, and for its many fans.

Yule Be Rich slot is the brainchild of 1×2 Gaming, and features 5 reels and 9 paylines.  The paylines are numbered by making use of Christmas baubles on the sides of the reels.

Symbols all burst with Christmas cheer and include a traditional ginger bread man, a ginger bread reindeer, a snowman, an angel, Santa Clause himself  and of course his trusty helper, a Christmas Elf.

The numbers Nine and Ten, as well as the Jack, Queen, King and Ace cards – all dressed in cheerful red Christmas hats – also appear on the reels.

The highest paying symbol is the angel, followed by the reindeer, snowman and ginger bread man, in that particular order. 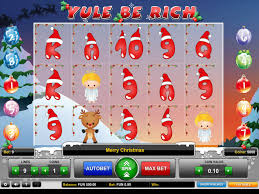 Yule Be Rich slot features a special snowflake wild symbol.  The wild symbol will transform into all symbols, except for the Elf and the Santa Clause symbol.   Any winning combination completed by the wild symbol, will be doubled up when paying out.

As a bonus is essentially a gift, it stands to reason that the Santa Clause symbol is the key to activating the Free Spins Bonus Game.

Whenever 3 or more Santa Clause symbols are landed on an active payline, the Free Spins Bonus Game will commence.

The Elf scatter symbol only makes an appearance on the reels during the Free Spins Bonus Game.  A fixed cash bonus prize is awarded whenever two or more Elf symbols are landed on any active payline.

The graphics are well-designed, but in a simple fashion.  This adds a touch of childlike excitement to the feel of the game.

The background music is a very off-beat rendition of Jingle Bells.  The music and background sounds can be turned on and off.

Yule Be Rich slot can be played for fun and for free, or for real money.